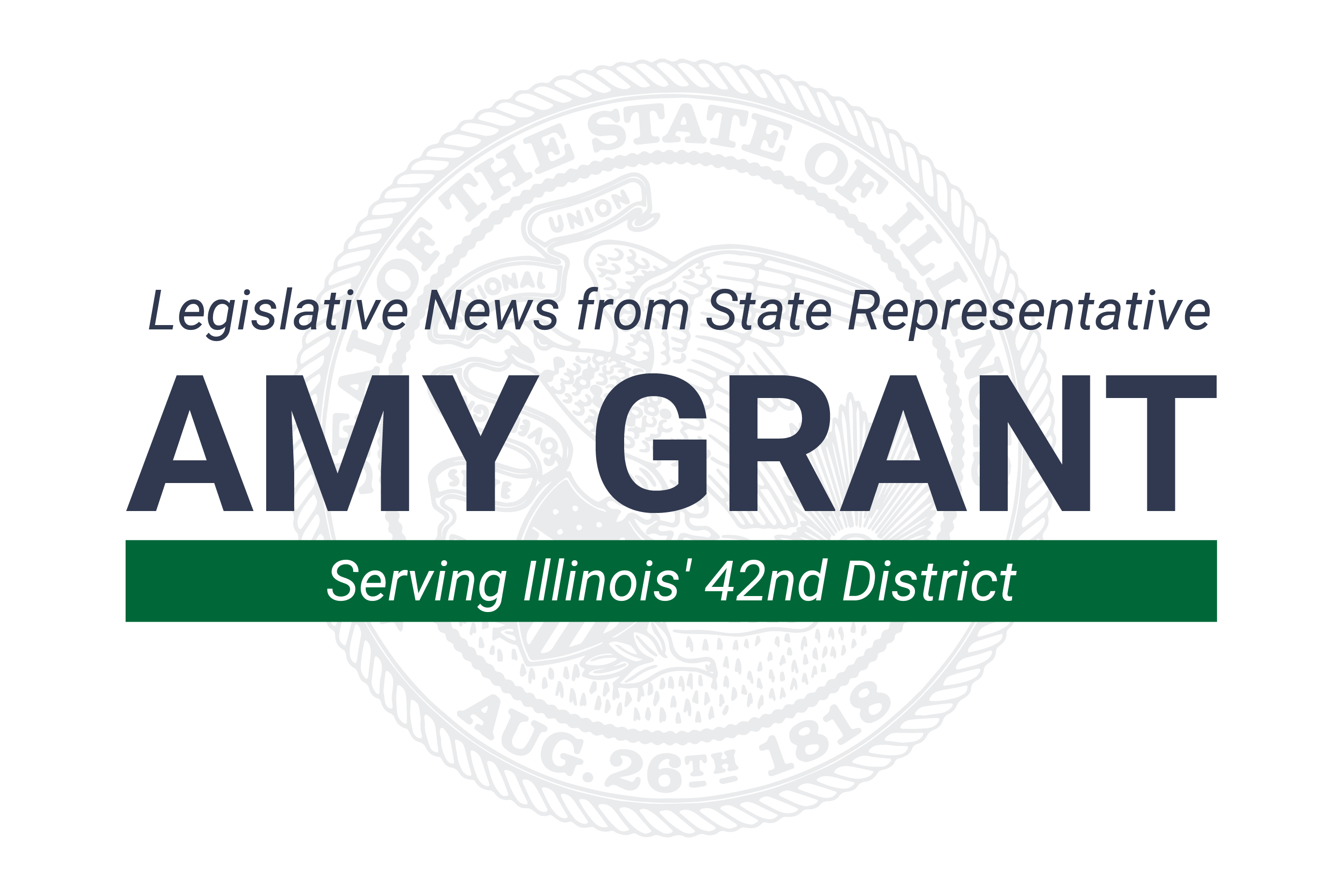 Prior to Inauguration, the caucus- including the new members, unanimously re-elected House Republican Leader Jim Durkin to continue leading in the 102nd General Assembly. Leader Durkin pledged to fight for Republican principles and to work in a spirit of cooperation with the majority party. I look forward to working with all ten new members as we promote good public policy.

As supplies of COVID-19 vaccines continue to be delivered to Illinois, new plans provide for immunization availability for approximately 3.2 million State residents. Eligible to be vaccinated in phase 1b will be everyone age 65 and older, plus “frontline essential workers.” A frontline essential worker is a first responder (police officers, firefighters, and others), an educator (teachers, child care workers, and others), a production/delivery worker (persons who work in factories, warehouses, and the U.S. Postal Service), or a member of certain other groups who have been designated as working in high-risk places such as correctional centers and public transit.

Supplies of vaccine have mounted up enough to enable Phase 1b procedures to begin this week in some regions of Illinois but vaccine shortages are likely to become a problem very soon. More than 570,000 Illinoisans had been vaccinated as of Thursday, January 21, but this still made up less than 5% of the total population of Illinois. People with questions about the supplies of vaccine in their home counties, and whether they are eligible to be vaccinated, should contact their local county health departments. In DuPage County, you can use this link: https://www.dupagehealth.org. Because vaccination policies are based on how much vaccine each local area has, the Phase 1b rollout is going to be done on a county-by-county basis.

Additional information about the vaccine roll-out can be found here.

Governor Moves Goalposts Again with Regard to Youth Sports

Last week, after facing a tremendous amount of pressure from parents and sports leagues, Governor Pritzker softened his stance on school-aged children’s ability to play sports. His new rule states that when a region reaches Phase 4 of his Restore Illinois plan, sports may resume with some COVID-19 guidelines in place. Click here to read about the new sports rules.

Our Region 8 is currently not in Phase 4. Click here to learn what is permitted when we reach Phase 4, which will hopefully be some time soon.

On the day of the Governor’s announcement, I penned a guest editorial on the issue:

While states all around us and across the nation are allowing children to engage in interscholastic sports, many Illinois kids remain on the sideline. Even the Centers for Disease Control (CDC) has said playing sports is OK during the pandemic, as long as certain protective measures are followed.

Our Governor, who continues to stress that we must follow the science and rely on the experts, has disregarded CDC recommendations on this issue. By doing so, he continues to deny a great number of our school-aged children the opportunity to play the sports they love. Through the development of his own metrics for high, medium and low-risk sports, thousands of kids- many considered at risk- are left to busy themselves in other ways and to wonder why some kids can play sports but they can’t. I stand with families and children across Illinois in saying, “This simply isn’t fair.”

In Illinois, the Department of Public Health (IDPH) controls if, when, and how school-aged children can participate in sports right now. Officials from the IDPH write the rules and decide what is safe and what is not. Rather than writing their own rules, they should be adhering to CDC guidelines for playing sports during the health pandemic. Today the IDPH Director announced that when regions hit Phase 4 they can play the “high risk” sport of basketball. When will that be? Will it be before the end of the regular season? How fair is it that kids in some parts of the state will soon be able to play while those in the suburbs will not?

We need a pro-family, pro-student approach to this, and parents deserve to make the decision that is best for their family and for their children. Families should have the freedom to decide if and when their kids should return to their activities. As leaders, we need to look beyond health that is tied to the COVID-19 virus, and look at overall student health. Kids’ mental health must be considered. The innumerable benefits of playing organized sports must be considered. The health benefits of regular exercise must be considered. We must also accept the reality that kids will gather. They can gather in a controlled setting where COVID-19 safety guidelines provide protection, or they can gather in family basements, parks and backyards where no safety precautions are in place.

There has been a lot of talk about equity lately. Is it equitable that these rules create “haves” and “have nots” with regard to who can play sports? Where is the outrage over the fact that under these current rules only children from families that can afford expensive travel leagues can play many sports right now? Some of the children who need the structure of organized sports the most are the very kids who do not have the means to join a travel league. As adults, we recognize the undeniable truth that the devil finds work for idle hands. We know that keeping kids busy through activities like organized sports keeps them away from trouble. It’s time for Governor Pritzker to listen to the CDC on this issue. It’s time to let kids play sports.

Our small businesses need our support right now, yet Governor Pritzker is trying to fill the state’s budget hole with COVID-19 relief funds earmarked for small business relief. In response to the Governor’s plans to place additional hardships on our business community, three of my House Republican colleagues held a press conference Friday morning to bring attention to the issue and urge the Governor to halt this back-door tax hike on businesses.

In the waning hours of the Lame Duck Session last week, Governor Pritzker attempted to rush legislation through the General Assembly that would have amounted to a tax increase estimated at anywhere from $500 million to $1.4 billion. That legislation would have decoupled Illinois’ income tax from a provision in the federal CARES Act passed last spring to provide support for small businesses hit hardest by COVID-19 by allowing them to deduct additional losses in 2020. The legislation failed to pass, but the Governor said in a press conference after its failure that he is planning to push the proposal again and try to force its passage before taxes are due this year.

Many states acted last spring and summer to decouple their income taxes from the CARES Act, giving businesses time to prepare. New York, for example, took legislative action to decouple in May. As you may recall, the Illinois legislature was in session in May, but this issue never came up. Illinois’ Department of Revenue did not alert the Governor to the issue until October, and then Pritzker did not announce his plan to decouple until early January. This late notice would have added insult to injury for struggling business owners. During the press conference the participants also noted that the Governor’s recent move to not implement the Blue Collar Jobs Act as scheduled this January was another blow to already struggling job creators, and this decoupling tax increase would have far worse implications.

The Illinois Council on Women and Girls invites young women ages 14 through 18 to apply to join the Council’s new Girls Committee. Participants will share their experiences and perspectives to help make Illinois a place where all girls can thrive.

Chaired by Lieutenant Governor Julianna Stratton, the Illinois Council on Women and Girls advises Governor JB Pritzker and the General Assembly on policy issues impacting women and girls in Illinois. Girls participating in the Council will have the opportunity to make a difference in issues affecting their lives and the lives of their peers. Applications are due by February 16, 2021. Click here for more details or to apply.

The troubled State agency provides overall services for Illinois veterans. These services include residential nursing care facilities for health-challenged veterans who have a variety of age-related conditions. Tragically, 36 residents of the Illinois Veterans Home-La Salle have passed away from COVID-19. This outbreak struck down more than one-quarter of the patients at the home. Patients at Illinois Veterans Homes are men and women of uniformed American armed service and their spouses.

The Department has not provided essential information to the press or to the General Assembly on how this outbreak happened and what steps had been taken to try to prevent it. As questions mounted, the Pritzker administration – which has overall supervisory responsibility over the troubled Department – abruptly announced the resignation of Director Linda Chapa LaVia, the now-former head of the Department.